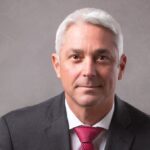 Lulus Innovation is honored to announce Brigadier General (retired) Ray Davis as its newest board member. BG Davis not only brings a unique military perspective but as the current Vice President of business development for Rolls-Royce his ideas will undoubtedly help us scale and grow as a company.

Brigadier General Davis joins Lulius Innovation with an extensive military career. He served in the National Guard for more than 32 years. In his last position, he served as a principal adviser to the director and deputy director of the Army National Guard and Adjutants General. BG Davis is also a Master Army Aviator with more than 2,400 flight hours, including 480 hours flown in combat in Kuwait and Iraq. His time in service gives BG Davis a unique perspective of just how important and needed our services can be for the modern day military. Lou Cabrera, Lulius Innovation Board Chair and former Senior Executive at the National Guard Bureau says “There is no better advisor to what is happening in the three components of Army Aviation enterprise than General Davis.”

BG Davis retired from the National Guard in December of 2020. He is now  a senior leader at Rolls-Royce and leans on his military knowledge to help lead the team there. We are excited to see where his new position takes him and thankful that he is part of the Lulius innovation board. “From a fortune 500 name brand like Rolls Royce to our startup, BG Davis is serious in helping the Army aviation enterprise, and I am grateful to have him onboard. It’s a great day for Lulius innovation.” said Rich Ferguson, Founder and CTO of Lulius Innovation